What You Need to Know About Our Furniture Repair Company

Count on Manoly Furniture Service in Venice, FL for furniture repair, restoration, and refinishing services. Our team of technicians is trained and equipped with various restoration techniques. We know the ins and outs of repairing and fixing kitchen cabinets, furniture pieces, and family heirlooms.

Request an Online Photo Estimate
You Asked for It! That Bulletproof Finish

Larry Manoly stepped out of high school and into a family business that would eventually put him in touch with a national treasure.

Manoly, owner of Manoly Furniture Service restores antiques and other furniture for residential customers and a list of commercial entities that include the US government. The government, Manoly said, is careful with its money and prefers to recycle its old desk in its custody rather than spend money to purchase new ones. So, Manoly was not surprised when he received a call to refurbish and repair a mammoth desk that was about to be removed from storage in a Washington, D.C. warehouse. But the desk was different, it was used by Herbert Hoover, who was our 31st president of the United States from 1929 to 1933. For years, the immense old desk had sat in the branch chief's office at the Department of Commerce's Bureau of Economic Analysis office on K Street, N.W. When the bureau moved to L Street, NW in 1993, the desk was placed in storage until Commerce’s undersecretary for economic affairs requested it be removed from storage, redone, and placed in his office. 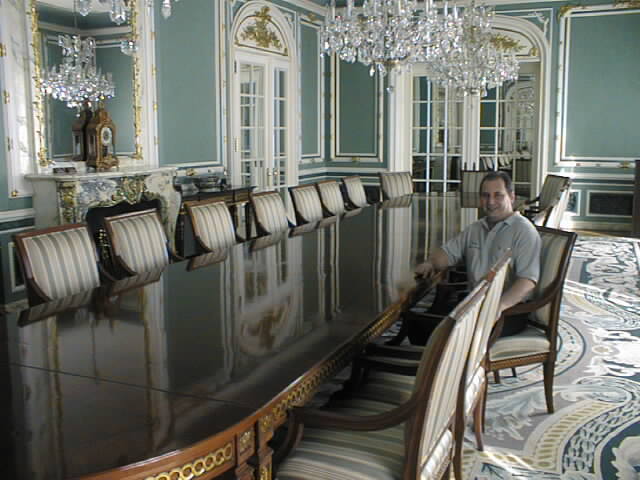 Above, Larry Manoly sits at the table he restored in Alexander Graham Bell's home in Washington, D.C.

For Manoly, the desk, with its 20 drawers—10 on each side—was a challenge. Extensive work was needed to restore the piece to its original condition, and twice as many men were needed to hoist the desk into a truck that would transport it to Manoly’s workshop. “It was probably one of the largest desks we have done because it was so massive,” said Manoly. “Four of us had to load it. Usually, it takes two guys and a dolly to load just about anything." At Manoly's workshop, the desk was disassembled before it was stripped, treated, and restored in a deep mahogany custom-matched stain reminiscent of its original finish. Brass locks and pulls were replaced by hardware that reflected the era. But, Manoly said, despite the beautification of the desk, it had to be functional. None of the locks worked, and the runners for the multiple drawers were worn, which caused them to shake when pulled in and out.

The repairs were made in addition to restoring the old desk that served President Hoover. A month and a half after Manoly picked up the desk the job was done. The desk's new occupant at the Commerce Department was delighted with the transformation, and a letter of Appreciation was sent to Manoly thanking him for his fine craftsmanship and "attention above and beyond the normal restoration."

While the Hoover desk was Manoly's most historical restoration assignment, he has done work for other well-known political figures, such as former Secretary of Commerce Ronald Brown, who was killed in a plane crash, and James Baker, Chief of Staff and Secretary of the Treasury under President Regan. Manoly's customers also include sports professionals with the Redskins and the Capitals, high-profile law firms in Washington, D.C., that want their office furniture maintained, moving companies, and residential customers who would like a family heirloom restored to be passed down to the next generation. "When I got out of school in 1971, the business was there for me," Manoly said. Manoly's grandfather Nicholas, who started the business, was a bedmaker in Austria before coming to New York. His father, Larry Sr., eventually took over the business with an uncle before Manoly became the president. "It's rewarding to take a piece of furniture and restore it," said Manoly. Manoly maintains a website with pictures. "You cannot explain to a person what it is going to look like until they actually see it.”

The old antique desk with the broken drawer has been sitting in your attic for years, waiting for the day when you finally drag it out to have it restored and made presentable again. But wait. Do you restore it? Or do you refinish it? Or does it really matter? Well, it does matter. Because whatever you do to improve the appearance of that old desk may very well end up impacting its value and not always for the better.

First of all, is the piece really an antique? For insurance purposes, antiques are defined as pieces that are at least 100 years old. Anything less than that is just "old" (still valuable maybe, but not yet classified as an antique). Secondly, restoring and refinishing antiques are two different processes. According to Larry Manoly, owner of Manoly Furniture Service, restoring an antique means taking it back to its original condition and finish.

"You're trying to take the piece back to the way it was when the piece was designed, and when it was built," he said. When you're restoring, you have to create the original finishes. You really don't want to strip off any old finishes, dents, gouges, scratches, marks—you don't want to take those out. You want to use the same type of hardware. You want everything to be original. And you want to get it to look as good as it can.

Manoly says restoring is a time consuming and sometimes an expensive process, but worth it for preserving the value of expensive antiques. For instance, he has restored an oak china cupboard that has been appraised at $20,000. If during the restoration, the old glass, which had begun to "bubble" from age, had been replaced with new glass, the value of the piece would have dropped. Someone who did not know what they were doing could easily have made that mistake. Whatever your piece is worth the cost of the restoration is really up to you, said Manoly. "A lot of times," he said, "people will put a lot more money into having a piece restored than the piece is actually worth. But when you're dealing with the average consumer, where it's a family heirloom or something that they just really love—it was their mother or father's, maybe a little writing desk from when they grew up—then money is not the issue. It's having the memory that's the issue." If you got a little antique rocking chair that maybe is worth $100.00, but maybe needed to be re-caned and refinished and re-done and it's going to cost $300.00, is it worth it to you to do that? To you, it might be."

The process of restoring a piece of furniture, like the oak piece mentioned earlier, is involved. The first thing Manoly does is photograph the furniture so that the finished piece is put back together in its original form. Then the piece is broken down as much as possible. "We take it apart as far as it's able to go," Manoly said. We don't break the joints apart, but if the doors can come off, we break the piece down that way." Next, the old finished is removed, but not by the old process of dipping that once was widely used in the furniture business. The old dipping process involved a lye stripper, which was extremely hard on the wood. "Nobody dips anymore," said Manoly. “It would just tear the heck out of the furniture." Once the furniture is stripped, Manoly and his staff will make any necessary repairs that are needed, then sand it to get it back to its original look. Chemicals are applied to remove some of the harsh effects of the stripper and ensure that the stain will go on naturally. "If you see some pieces that people have done on their own,” Manoly said, when they stain it, it’s real dark in some places, in some real light. It looks blotchy." The cause, he said, is poor preparation. Finally, finishes and stains are applied, a topcoat is added and the whole process is "rubbed out" or buffed to make it shine. Any hardware for the piece is also cleaned and installed. The furniture is now ready to be delivered back to its owner.

Refinishing, on the other hand, is a less costly process because it only involves "refurbishing" or making a piece look as close as possible to the original, but without worrying about using authentic finishes and hardware. "Refinishing is always cheaper than if you had to replace a piece," said Manoly. But refinishing, unlike restoration, usually involves stripping a piece back to the original wood before applying new stains, which does not diminish its value. "If you're concerned about value," said Manoly, "you don't want to strip off the old finish and go down to the bare wood. But, sometimes a piece has been so badly deteriorated that you have no choice but to refinish the piece. It's not even a question of trying to restore it back. So, you have the burden of saying yes, this may lose some of its value by refinishing it. But, at the same time, it will look a thousand times better. And if, as Manoly said, it's a piece of furniture you want to hand down to your child mostly for sentimental reasons, that may be all that is necessary.

As Manoly talks about his craft, his expertise-honored by many years of hard work - is obvious. "Experience is really the best teacher," said Manoly. He should know, having worked since high school in a family business that was built on his grandfather's know-how and fostered by two generations of son's knowledge and trust.

Manoly’s furniture maintains a website that includes a photo gallery of some of his restorations. You can get more info on Manoly Furniture Service by visiting his website at www.manoly.com.

Locations to Serve You